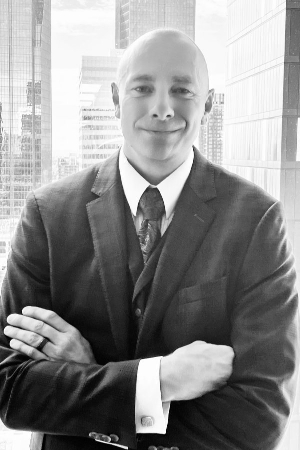 As a former businessman and professional athlete, Alex Weis brings a wealth of Family Law experience and perspective to Foster LLP. He grew up in Calgary, Alberta. In 1997 he attended the University of Calgary, working on his undergraduate studies while playing on the University’s Varsity basketball team. In 1999 Alex moved to Europe to play professional basketball with UKJ SUBA in St. Polten, Austria. Alex completed his Master’s Degree (M.A.) in Strategic Studies; writing his thesis on U.S. counterterrorism while sitting on several committees during his graduate studies. In 2009, Alex earned his Juris Doctor (J.D.) from the University of Ottawa, writing a major paper on spousal support and post-separation increases in income.

Alex has practiced exclusively in the area of family law since 2012 and was called to the bar in August of 2013.

Alex has advocated at the Court of King’s Bench, Provincial Court, and Court of Appeal. His assertive style and presence are motivated by a desire to maximize results for his clients while providing the greatest value. Alex has vast experience dealing with issues of Domestic Violence and Emergency Protection Orders, and matters that involve high-conflict parenting.

As a Certified Mediator and an Arbitrator, Alex’s emphasis has been on high-conflict separations and divorce, dealing with property, support, and parenting.

Alex’s mediation/arbitration practice is directive and outcome-focused. He specializes in reopening what have otherwise been unsuccessful negotiations with a fresh perspective. Alex services represented and self-represented litigants alike, and he believes that resolutions can be made without needing to attend Court, even in high-conflict situations.

If a resolution ultimately cannot be reached, Alex will assist the parties in resolving matters via binding arbitration. All of Alex’s services come with detailed written reporting at the conclusion of mediation or arbitration. Alex can deal with issues on an urgent basis with a focus on finding short and long-term solutions for the parties.